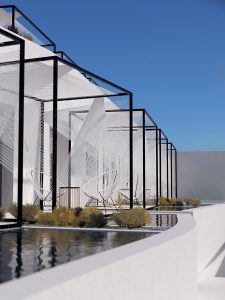 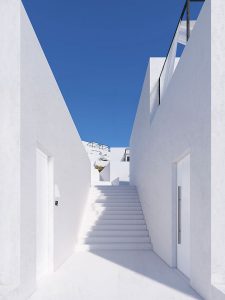 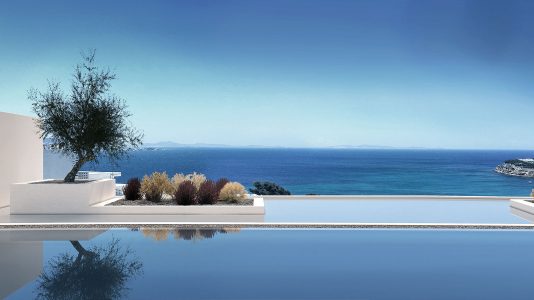 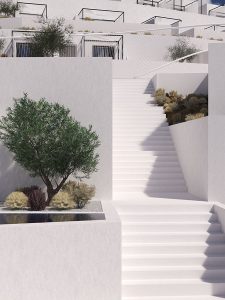 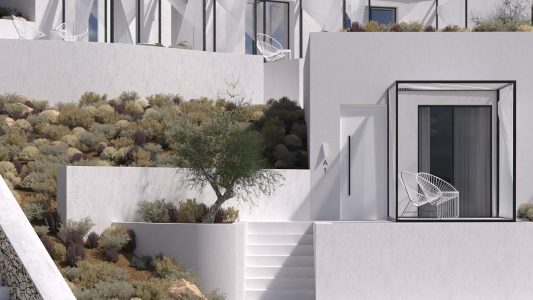 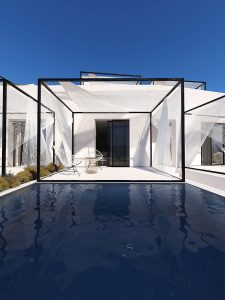 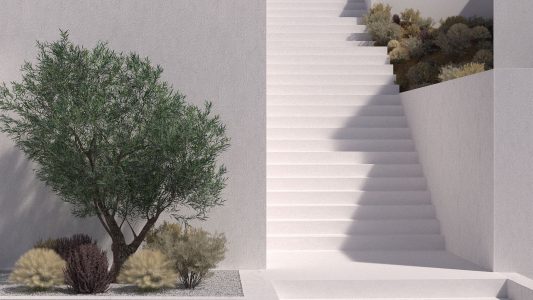 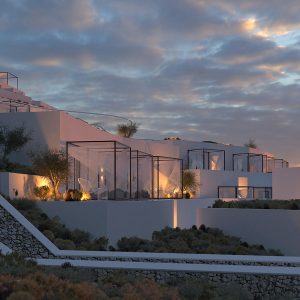 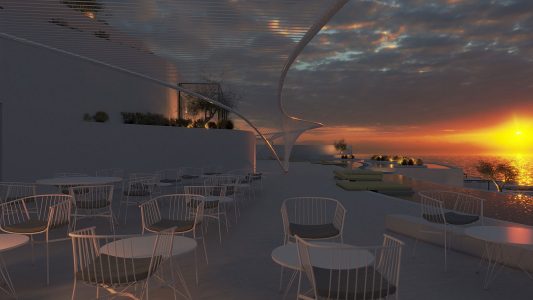 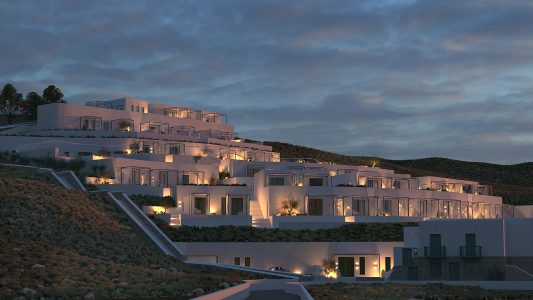 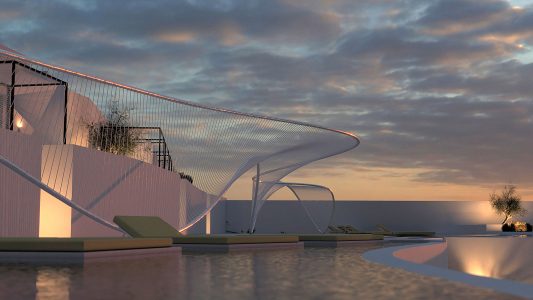 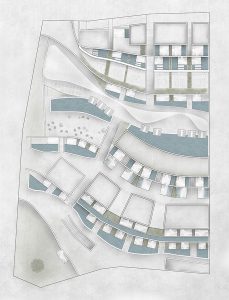 The plot is located exactly on the boundary of Agios Stefanos traditional settlement, a fact that requires a gentle gesture during the synthesis, as the settlement and off-settlement conditions should cooperate in an imaginative way. The geomorphology of the terrain, with its intense slope, a series of dry-stone walls and the southwest orientation to sea views were the main conditions to take into account, at the beginning of the compositional procedure.

Driven by the intense slope of the natural terrain and the platforms formed by dry-stone walls, the ground curves serve as the main compositional tool, with the synthesis aiming to redesign such natural and manmade elements. The hotel develops in four distinct zones so that all room units, as well as the public areas, have unobstructed view to the archipelago. A structure system is created to accurately organize the seemingly fluid forms.

According to the owners’ tight brief, the resort itself comprises 47 suites of 3 distinct typologies, two of which are fully accessible to people with disabilities. The room typologies differ based on the rooms’ surface and their access to a private pool or a jacuzzi. The hotel’s portfolio includes 19 pool suites around 29 m2 with a private pool at their private outdoor area, 18 junior suites ranging around 26 m2 and owning a private pool or jacuzzi and 10 classic rooms around 21 m2 that have a jacuzzi.

Common spaces include a lobby with back office, luggage room and restrooms, a spa & wellness area, as well as a gym and two public pools. The restaurant’s service capacity provides seating for up to 88 patrons, 48 of which are served outdoors, under a canopy or under the bright mykonian sky and the other 40 are served indoors. The pool area provides 23 double sunbeds and a bar. The hotel also has an underground car park area of 20 parking spots, a laundry and several storage rooms and electromechanical installations spaces, which make the complex a self-sufficient hotel unit.

The lower building zone, formed as an in-cave structure, hosts the reception area, easily accessible by the tenants by the municipal road network, the airport and port, as well as Agios Stefanos beach. The upper building zones host all room units divided in two or three levels at each zone. The main route begins with a staircase, through a rift in the subterranean reception’s ceiling, crossing all residential building zones and ultimately leading to the common area where the pools, the bar and the restaurant are located.

The off-white plaster used on the hotel’s façade seems even brighter under the light and makes a contrast to the bright blue mykonian sky, while metallic elements are used for special constructions and pergolas. A series of metallic framed boxes with white strands follow the building’s flow lines and create visual filters between the suites’ private outdoor areas, while leading the gaze to the sea views. Prominent identifying element of the complex is the free-form central canopy of the common outdoor space, which stands out as an undulating ribbon consisting of white metallic strands.