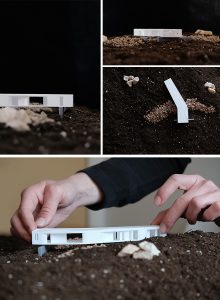 On the island of Mykonos, one of the issues that concern us is the contemporary morphological approach to the built environment, in light of the modern housing needs, as expressed by the permanent or temporary residents.  The basic forms of Mykonian Architecture can be transcribed in new forms crystallizing a new architectural narrative worthy of modern requirements.

We made the conscious choice to avoid the sterile imitation of the existing paradigm of a succession of solids and voids and chose instead to propose their “merging” into a single monolith. This allowed us to explore the limits of the form, always keeping function as our starting point.

The place defines two very important elements, the imposing view of the Aegean sea and the intense unevenness of the ground that forms two distinct levels. The solid is modified, it is “sculpted” from the north wind, it is curved to protect its insides, it is pierced to bring in the refreshing salty seα wind. The light passes abundantly in the new spaces that are formed. The volume is based on two points, utilizing the geomorphology of the soil and the modern construction possibilities.  It reaches high, turning its gaze to the horizon and at the same time protects its inhabitants from the elements.