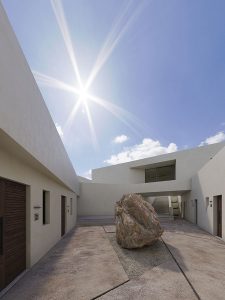 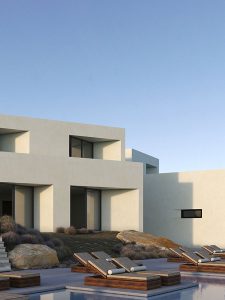 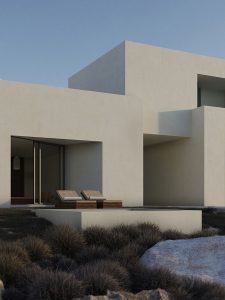 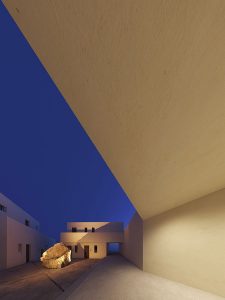 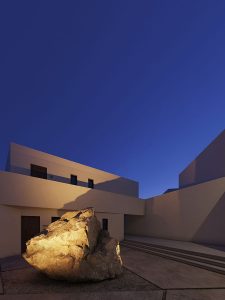 The ownership commissioned gnb architects with a direct award of contract to develop the architectural study of a five-star hotel, with their only requirement to be that the concept meets the contemporary standards of architecture and tourism.

A solid monolithic building volume follows the triangular geometry of the plot. By digging and drilling methods, parts of this monolith have been removed, in order that natural light enters all interiors, as well as to create successive sea view frames and clearly defined public routes.

The hotel’s capacity rises up to 40 beds, while two of the room units are fully accessible by people with disabilities. Among the common spaces, one faces a restaurant, a pool bar, spa & wellness area, a library, a business centre and a cinema. The hotel disposes of plenty auxiliary spaces, like staff’s restrooms, a laundry, a back office, several storage rooms and electromechanical installations spaces, which make the complex a self-sufficient hotel unit.

Following an introversive structure, the atrium is formed at the core of the hotel unit. It introduces the tenants to the complex, distributes public and private routes to their respective venues and hosts the restaurant area. All routes are clearly defined and, passing through the building’s mass, lead to outdoor public areas.

The intense slope of the plot led to the development of the hotel in three building levels, two of which stand above ground while one lays underground. Driven by the intense slope of the natural terrain, we created on the north side of the hotel a ground floor reception area, while under this unit we formed the wide descent that reminds the traditional arcades named “stoa” and leads to the core atrium. Towards the south, the two-storey building volume is gradually revealed, as well as the common outdoor areas, protected by the north wind.

All room units dispose a private pool or a jacuzzi and an outdoor area. Concerning the landscape design, a slope that begins in the southwestern rooms’ outdoor areas and reaches the pool, forms the pool and bar area and is where the tenants have the opportunity to relax with sea views. Natural materials are used and where possible the natural terrain is preserved, intensifying the sense of a monolith based on the ground in a natural, virgin, earthy, rough environment and creating an inextricable link with the site.