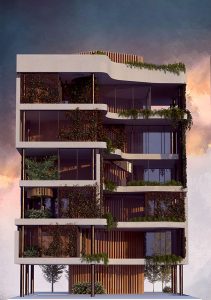 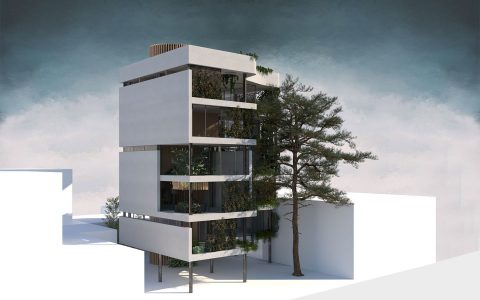 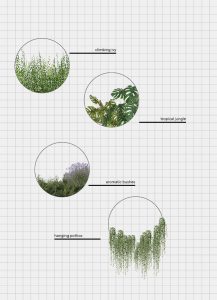 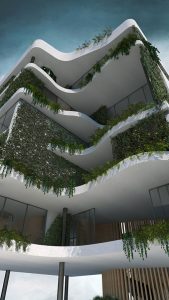 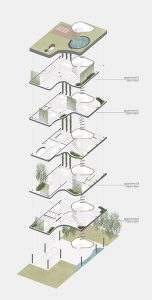 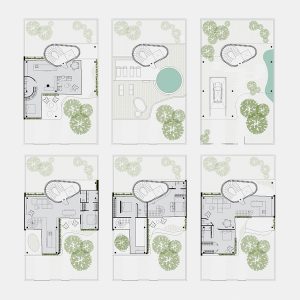 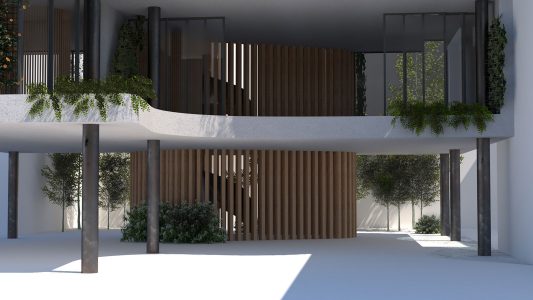 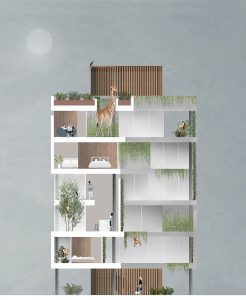 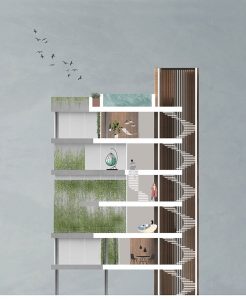 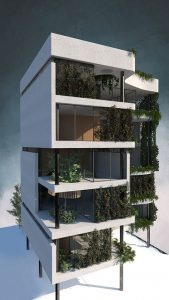 With the intention of renegotiating and redefining urban housing, our proposal introduces a new approach of urban apartment living within the dense urban net of Nea Erythraia, seeking to restore the planting and a sense of living in nature.

The building is formed by the minimum necessary elements, allowing the planting to occupy most of its shell. Horizontal surfaces, vertical slender elements that pierce them and free-form panels are the main components in our composition’s toolbox, while the egg-shaped pillar of vertical circulation is the only element to distinguish. At the same time, it seems like other shapes have left their footprint on the building as voids, creating atriums and double-height spaces. The building is based on a pilotis, which intensifies the sense of permeability, while a water strip leads to the back yard that is visible through the entrance of the plot. The structural system is revealed, visually contributing to the special morphology of the building.

Since the first stages of the concept design, our main intention had been the creation of bright permeable spaces, as well as the direct connection and interaction between the interior and the outdoor spaces of each apartment. The chosen structural system of metal columns and concrete-encased delta beams allowed us to have a free plan with the least imprint of structural elements on the floor and in space, offering greater design flexibility. Sliding or fixed wooden panels, curved in most cases, separate the interior areas with a sense of fluidity.

According to the investors’ brief, the building program includes 4 independent residences of different typologies that occupy 5 floors, thus aiming to meet the needs of a variety of target groups. The flexibility, with which the design was dealt, resulted in the combination of a 110m2 residence on a single level, two 150 m2 residences that extend to two levels each and a loft-type residence of 100 m2. On the last level of the building block, our study introduces a roof garden with swimming pool and living area as a meeting place for the tenants’ common outdoor activities.

Our proposal’s materiality palette includes unplastered concrete that, poured in metal formworks, creates the slabs with encased beams, iron for all metal elements, as well as natural wood that in most cases appears in the form of curved surfaces made of vertical wooden slats. At the same time, wide framings offer a sense of permeability to the residences and ensure directly the visual and spatial contact between interior and outdoor areas.

Prominent identifying element of the synthesis is the planting that had a dominant role during the compositional procedure, not just by occupying space, but mainly as a core compositional architectural tool, as an element of bioclimatic design and also a special structural model on the façades. The landscape design study led us to the choice of specific planting species, in order to achieve the necessary shading conditions of all private living areas depending on their orientation, as well as unobstructed views from the roof. In addition, deciduous and evergreen climbing plants were selected to be placed on fixed metal panels of the north and northwest façades, offering gradient shading throughout the year, while ensuring at least the minimum necessary privacy. Aromatic and arid species were selected to be planted on the roof and the private outdoor areas of each residential level, aiming to the creation of a microclimate, the residences’ aesthetic upgrade and unobstructed view due to the low height of the planting, having at the same time the minimum care needs.